April’s TNT brought us a new champion, Joe Smith! Find him at Blue State or Three Little Figs; big thanks to Dylan for solo-judging half the night, and as always, our lovely sponsor La Marzocco!

We’re throwing one of our biggest parties yet this month — TNT at Simon’s Coffee Shop on the shop’s ten year anniversary! Simon was doing quality, progressive coffee before it was cool, and has been a springboard for many of our community institutions.

Posted on April 17, 2012 by bostontnt
April TNT is already here! It’s this upcoming Thursday — April 19th! As always, 7PM signup, 8PM first pour.  This month we are back at dwelltime, who hosted the first Boston TNT — back then it was still a construction site, and now it’s finally a real shop.
Marzocco is again buying us beer, big thanks to them! Thanks to Katy at Counter Culture for pulling together the flyer!

Posted on April 15, 2012 by bostontnt
April TNT is already here! It’s this upcoming Thursday — April 19th! As always, 7PM signup, 8PM first pour.  This month we are back at dwelltime, who hosted the first Boston TNT — back then it was still a construction site, and now it’s finally a real shop.
Marzocco is again buying us beer, big thanks to them! Thanks to Katy at Counter Culture for pulling together the flyer!

*TNT has been rescheduled due to the Back Bay power outage — it’s now on March 22!*

The third Thursday falls early this month, so this time TNT is on March 15! Pavement is our host for this month. Spread the word!

It’s been a whirlwind of a month, as we’ve been running from event to event in Boston, then down to NERBC, where Boston made a strong showing. February’s Boston TNT at Render Coffee went down on 2/16! Sixty baristas packed the space, and the competitor list filled just twenty minutes after it opened.

Marzocco for sponsoring us and picking up the tab! They also sent us a bunch of prizes, and lots of folks walked away with these swanky Marzocco – Made in Florence scarves. Counter Culture threw in prizes, including a sought-after Bonavita electric kettle.

As the competition got going, our final round pitted Ben Pratt, roaster at barismo, against the reigning TNT champion, Chuck from Render. Both chose gibraltars for their final pours, and Chuck walked away with his title intact (plus a cupload of cash)! 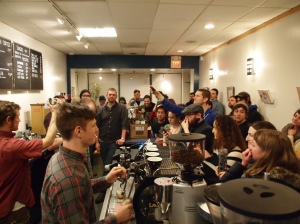 It’s that time again — February TNT is coming up next week on Thursday, February 16. Render Coffee is our host this month. Chuck, January’s champion, will be defending his title on his home turf. Open to all baristas and coffee professionals, it’s free to attend and $5 to throw down. Competitors will pour head-to-head, with the winner walking away with a hefty cash prize. 7PM registration, 8PM first pour. The list filled quickly last time, so get there early if you want to throw down!

This event wouldn’t be possible without our awesome sponsor, Marzocco USA. They’ve thrown their weight behind supporting TNT as a community event, and will be providing beverages for the night. Also thanks to Counter Culture Coffee, Render’s primary roaster, for providing prizes! 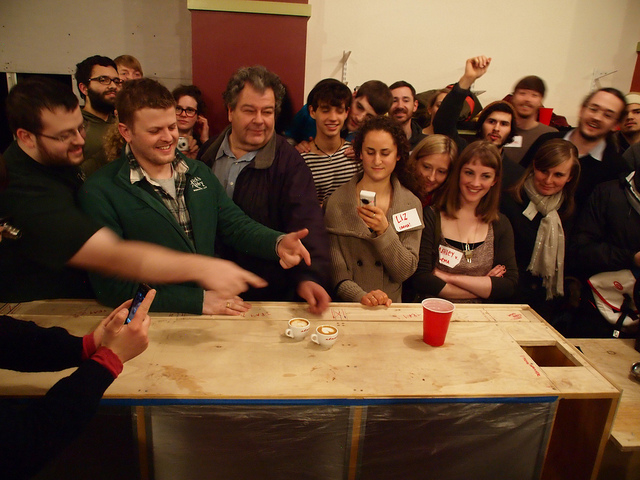 Boston Thursday Night Throwdown launched with a massive attendance last Thursday! Nearly 100 baristas and coffee professionals from around the Greater Boston area gathered at dwelltime, our January host. Check out the crowd early on:

24 competitors poured head-to-head, and we got the answer to the most important question — just how quickly can a group of baristas drink a mini-keg and six growlers from Jack’s Abby Brewing, our beer sponsor. There was lots of interest in the coffee project Jack’s Abby brought: their Smoke & Dagger black lager dry hopped with barismo’s Yellow Bourbon Bosque microlot.

We started the night with a competitors list that included baristas, roasters, and techs; over the course of two hours, the semi-finals narrowed down to Joe from Blue State, Stephen from barismo/dwelltime, Zoe from Voltage and Chuck from Render. Our final round put Joe and Chuck head-to-head in a macchiato throwdown. One of many close calls, Zoe (L) v. Chuck (R) from the semifinals:

At the end of the night, Chuck won a pitcher full of cash. His title will be on the line next month at February TNT, hosted by Render Coffee!

Special thanks to our tech sponsor, Ethan Miller from Shot Doctors, for taking care of the Strada EP install for TNT.

Check out media on TNT below:

* We’ve been lucky to get widespread publicity, and the word has gone out far and wide. To clarify, January TNT is a private industry event. There’ll be hosting public events in the coming months!*

We’re excited to announce the first Boston TNT event to kick off our Thursday Night Throwdown series in 2012. Each month, a different shop will play host to a no-pours barred latte art throwdown for glory, bragging rights, and sweet prizes! Our first event is being hosted by dwelltime. Sign-ups at 7PM, first pour at 8PM — $5 to throw down, with all proceeds going to prizes or donated to a nonprofit.

We’ll also have folks from our brewer sponsor with us, Jack’s Abby Brewing! They’re based in Framingham, and have been working on some exciting coffee-beer projects in recent months.